IT LOOKS like Croesus Mining has done it again – picked up somebody else’s leftovers and discovered a pot of gold.

Bought for a song at $2.9 million, in ten short weeks the historical Davyhurst prospect has turned up shallow, high-grade drilling results at its Golden Eagle and Giles deposits and throughout the Mulline area north of Giles.

Croesus conservatively estimates Davyhurst could produce at least 150,000 ounces of gold at a cash cost of $260/oz. Managing director Michael Ivey said the project would generate a $34 million operating surplus in its first year of production.

Croesus currently has $21 million in the bank to bring Davyhurst on stream - and no debt.

Part of the attraction of the Davyhurst project is the 1.3 million tonne per annum treatment plant that was moved from Bardoc and upgraded and refurbished in 1997.

It is hard to imagine that 100km north-west of the Kalgoorlie Goldfields a tenement of 560sq.km complete with mining infrastructure and a resource of 400,000oz could be snatched up for such a meagre sum.

But these have been lean times for many gold miners. After investing at east $20 million in the project, Consolidated Gold NL appointed an administrator in March 1998. Davyhurst Partners Pty Ltd, a subsidiary of NM Rothschild & Sons, purchased the project in October 1998.

For Croesus it was a matter of the right time, right place and right price. With $21 million in its coffers, the company could afford to pump $5 million into the project to continue exploration.

Following an evaluation of previous exploration results, Croesus geologists had a re-think of the geology of the known Golden Eagle, Lights of Israel, Giles and Mulline deposits at Davyhurst.

Drilling by ConsGold and DPPL in 1998-99 suggested a significant gold anomaly at the Giles deposit, but it was never followed up.

RC drilling by Croesus confirmed earlier results and has identified a high-grade gold zone over at least 300m strike.

The Giles deposit is extensively weathered to 45m below surface, and a steep west-dipping fault is interpreted to control mineralisation at depth.

Infill diamond and RC drilling is currently underway at Giles with reserve estimates expected in the next quarter.

“We found a memo in old records stating a 9000oz deposit was calculated for Mulline,” Ivey said.

“We have hit plenty of alteration in our drilling but are awaiting assays, so the jury is still out as to whether there is gold in it.”

Drilling at Mulline has also identified significant laterite mineralisation at surface with grades up to 1.85gpt gold reported from a depth of 1m.

“If we get a few hundred thousand tonnes of laterite we will throw it through the mill,” Ivey said.

Results from the Golden Eagle pit have been the most instantly gratifying for Croesus.

“To date we have put four holes in and have got four significant results,” Ivey said.

Reverse circulation drilling has intersected the main ore body (mined via open pit by WMC) 100m along strike from the previous known position.

Intercepts of 6m at 8.4gpt and 7m at 9gpt have confirmed the continuity and grade of the ore body.

The Golden Eagle deposit has a diluted indicated resource of 743,000t at 2.9gpt gold.

Croesus has plans for the Lights of Israel deposit to be developed along with the Giles and Golden Eagle open pits. ConsGold mined the deposit via a portal at the base of the 100m deep LOI pit. The deposit has an estimated resource of over 250,000oz.

“We haven’t had this amount of rigs on the go since Binduli,” Ivey said. “We will consider bringing another one in to get things moving.”

Thrilled by developments at Davyhurst, Ivey expects to bring the project on stream by March 2001.

“If this is what we have found in 10 weeks and that blows out, who knows what we are looking at,” he said.

“We haven’t even targeted our primary reason to purchase the property, the Zuleika shear.” 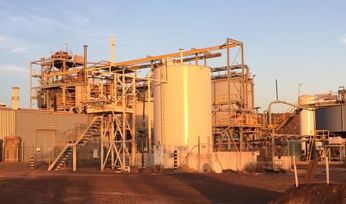 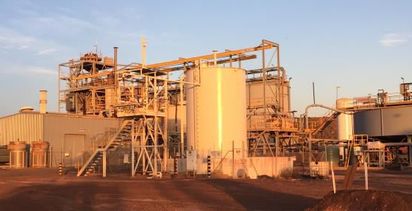 Yet another good day for gold stocks