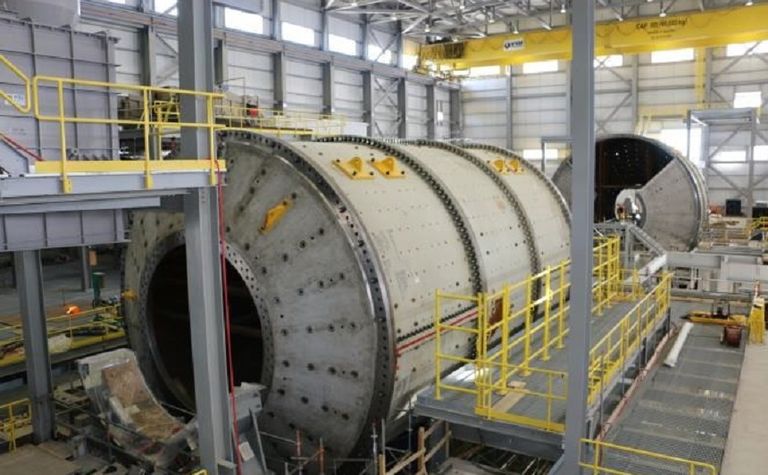 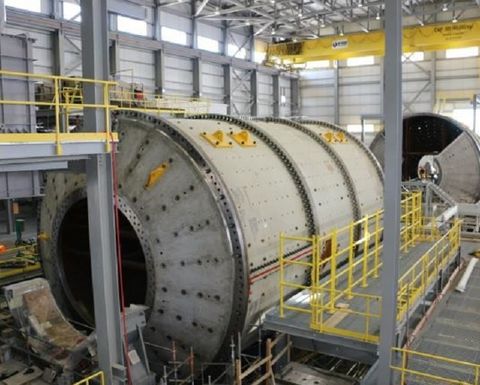 Ball mill shell in place in the Rainy River plant

“We note the ramp-up to full production [at Rainy River] is a higher risk phase [of the project’s development], particularly with larger mills,” RBC said in a post-visit note.

“Based on our proprietary database of similar sized ramp-ups, it typically takes 11 quarters to reach steady-state throughput with 60% of design achieved in 1-2 quarters and 80% in 3-4 quarters.

“Once at steady state design levels the [Rainy River] project is expected to nearly double New Gold’s current production at below average costs. In the near term, the project is in the midst of a higher risk phase as construction is completed and project ramp-up begins.”

The usual market malaise around such a pivotal commissioning is in evidence with New Gold, which is shooting for gold production of more than 360,000oz in 2016 from its existing operations in Canada, USA, Mexico and Australia (plus significant silver and copper output). Rainy River, 100%-owned, is slated to add 325,000ozpa to that from FY2019 when Rainy River underground production kicks in (recently delayed by a year).

The scale of Rainy River, which cost New Gold $300 million in cash and scrip to buy, and is absorbing more than $1 billion to build, makes accessing the project’s full forecast $200 million or so of annual free cash flow critical.

Dual-listed (TSX/NYSE: HGD) New Gold has surged this year along with gold peers, up 114% since January 19. But its share price is down 35% from an August 10 high of US$5.94, and has drifted 32% lower since the start of last month. A softer gold price has also contributed to that but cornerstone project deliveries will sideline investors ahead of clear de-risking and de-bugging.

New Gold had a market capitalisation at the end of last week of $1.97 billion.

RBC confirmed Rainy River was about 55% complete and “on track for start-up in mid-2017”.

The bank’s analysts said New Gold recently accelerated heavy purchases of mobile fleet to ensure its material movement rates remained on schedule and ore stockpiling was on target. New Gold has said the doubling of the haul-truck fleet to 16 trucks and addition of a third mining shovel would enable it to lift its daily mining rate from 85,000 tonnes to 145,000t. It was aiming to pre-strip 45-50 million tonnes of overburden by mid-2017.

“The larger fleet also allows the pit to be opened up earlier, which should provide greater operational flexibility, including the ability to stockpile lower-grade material and reduce congestion in the pit during initial phases of production,” RBC’s analysts said.

“Mill construction [is] progressing well. Overall, the processing plant is now about 50% complete, with steelwork and concrete placement nearing the final stages, mill shells installed, and a majority of equipment purchased. The focus has shifted to installation of mechanical, piping, electrical and instrumentation in the plant.”

New Gold is also expecting receipt of its final tailings dam Schedule 2 permit in mid-2017, allowing it to complete the first tailings lift by October next year. But it is also building a starter dam with six months of holding capacity so the project timeline doesn’t hinge on the main dam permit.

“With the project expected to benefit from low cost power, skilled/productive workforce and access to well-developed infrastructure/supply chains, we expect Rainy River to be a low cost producer.

“We expect the project's economics to be further enhanced through reserve and resource growth including addition of the Burns Block [Bayfield acquisition] and regional exploration.”

New Gold says deferral of the proposed $100 million underground development at Rainy River will better position it to “generate robust free cash flow once the mine begins production in mid-2017”.

“The combination of Rainy River’s location, average gold head grade of 1.5 grams per tonne over the first nine years, secured low power rates and predominantly Canadian dollar denominated operating costs is expected to result in below industry average all-in sustaining costs … [of] $710 per ounce over the first nine years of the mine life,” it said. 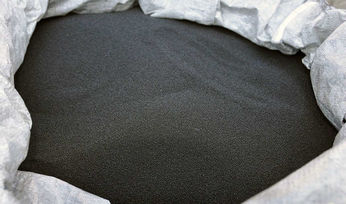 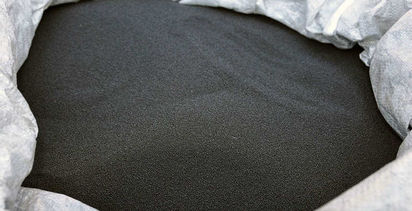