Corporate minnow Inca Minerals is not shy when it comes to chasing big exploration fish. While he and his board made a pragmatic but “painful” decision not to pursue a potentially sizeable, deep copper-porphyry prize at Chanape, Inca managing director Ross Brown has bold plans for the company’s new catch, Riqueza, in central Peru. 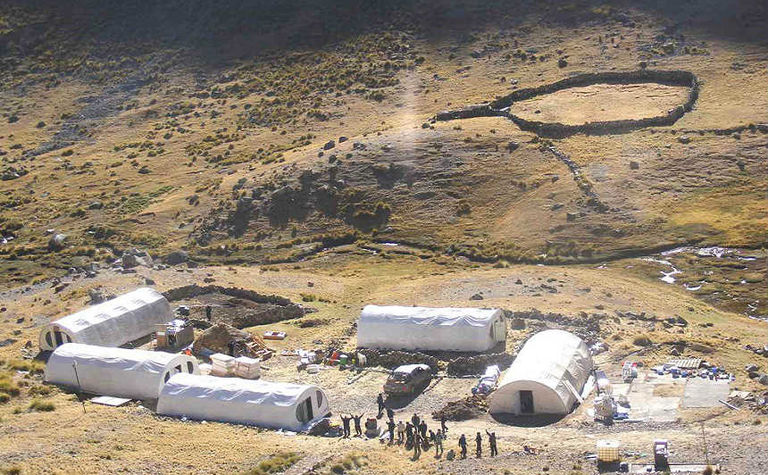 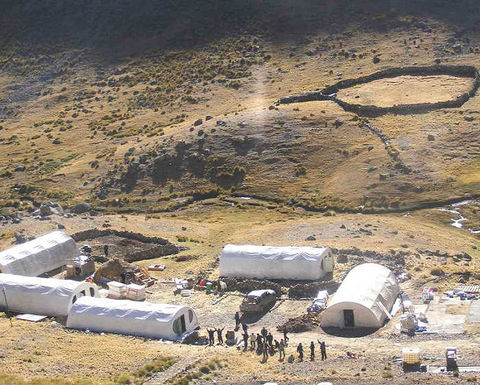 Changing camps ... Inca's old exploration digs at Chanape. It has switched focus to zinc at Riqueza

The company (ASX: ICG), active in Peru since 2010, is currently valued by the market at about A$3 million (US$2.2 million). Its exploration budget last year and in prior years belied its microcap status (in the millions per annum), but $500,000, 1km drill holes probing for the porphyry copper at Chanape ultimately became too risky for the company.

Fortunately, Brown’s Peru network had thrown up another option and this one gives Inca a reasonable shot at achieving its objective of snagging a JORC resource within two years, even given the frequently long waits for drill permits in Peru. Inca would probably have changed tack earlier but it took a year or so to negotiate terms and conditions with the Canadian holder of the central Santa Rita (within Riqueza) concession.

“I think Riqueza could deliver a high-grade plus-10-million-tonne zinc deposit,” Brown told Mining Journal, acknowledging there is obviously a lot of water to go under the bridge before the numbers become more than a notional.

“For me, grade is king. We went for size at Chanape and learnt a lesson. Riqueza is all about grade.

“I think Riqueza is a typical polymetallic replacement style deposit; about equal amounts of zinc and lead, with very strong silver. I’m not ruling out skarn at depth. Right now we have multiple veins – breccia veins, mantos and breccia ‘occurrences’ [that] may be collapse-structures, and feeder zones concentrated in two areas, Humaspunco and Uchpanga.”

Riqueza is in the copper-zinc skarn and epithermal gold-silver belts of central Peru. There are a number of zinc plays in the area and, along the belts, Colquijirca in development (84Mt grading 7.5% zinc equivalent), Morococha (30Mt at 7% zinc), and Pallancata (4.9Mt of 308g/t silver), among others. More broadly, Peru is the world’s No.3 zinc address for production and reserves.

Humaspunco and Uchpanga were the focus of small-scale mining last century and have been shown to host significant concentrations of zinc, lead and silver mineralisation. Brown says results of “several phases of surface sampling” established the bona fides of the two areas. Inca has collated the sample data and “recognised the very high potential of these prospects and areas surrounding them”. It is still working on collating all the old Santa Rita geological reports and information thought to be available, and there is production data from the 1950s and even the 1980s among ‘missing pieces’ of the puzzle.

Brown said it seemed no-one had really thought about the exploration potential of Riqueza before.

“The emphasis seems to have been small-scale exploitation. A common theme in all the reports was an apparent need to estimate reserves based on the known workings [which] are non-43-101 or JORC compliant,” he said.

“We have gathered strong evidence already that shows extensions of known mineralisation and our focus is to determine the full potential of the project area.”

The circa four-month interim period between now and receipt of a drill permit (all going well) “will be very busy with drill target generation and prioritisation work, inter alia, mapping, sampling geophysics”.

“The aim of this work is to identify and rate all surface [via mapping and sampling] and sub-surface [geophysics] targets for phase 1 drilling,” Brown said.

Precise details of mapping, sampling, geophysics and drilling had not yet been determined, but “there are over a dozen known high-grade zinc-silver-lead targets already”.

“I expect to double this with the work we have planned. I’m thinking circa 500 channel samples, project-wide mapping at 1:10,000 scale and target mapping at 1:1:000 scale, two IP surveys over Humaspunco and Uchpanga, 20 drill platforms, 60-to-100 holes for a total of 10,000m to be completed over two years.

“Inca’s focus is to deliver shareholders a JORC-compliant mineral resource within two years.”

Inca has been running low on cash so an equity raising can’t be far away.

There aren’t many ASX-listed companies with Peru zinc exposure and Inca has been well supported by quality smaller sector-focused brokers while Perth-based Element Capital has a capital-raising mandate. Another local broker, DJ Carmichael, was lead manager on Mexico zinc developer Consolidated Zinc’s A$2.75 million June 2015 raising. It, too, has been supportive of Inca.

“We are on many radars,” Brown said.

“Our aspirations are certainly to tap into the zinc [market] macros. We feel our timing is perfect in terms of the ore replenishment and acquisition cycle. 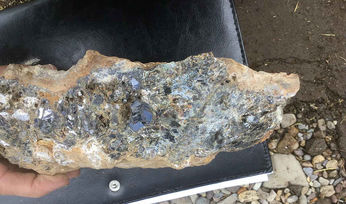 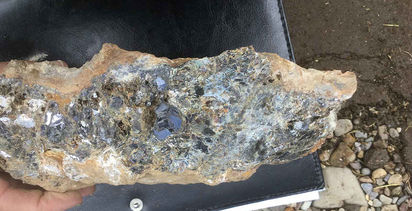