The MoUs are valued cumulatively in the range of US$3 to $4 billion.

FMG signed MoUs with long-term partner and major shareholder Hunan Valin Iron & Steel Group Co for the supply of iron ore and procurement opportunities, as well as the Bank of China, Sydney Branch (for strategic cooperation.

The agreements come amid fears China will impose bans on the import of Australian iron ore.

FMG CEO Elizabeth Gaines said the company had built enduring relationships with its stakeholders in China.

"Our engagement extends beyond iron ore supply to longstanding customer relations, procurement and financing arrangements as well as academic, policy and social linkages," she said.

"Fortescue's success and that of the Australian economy has been built on the great powerhouse that is China. Now, more than ever, these strong trade relationships provide economic stability as we work together to build new opportunities for the future."

Further to the MoU for the ongoing supply of iron ore, we have signed a strategic cooperative agreement for fabrication supply with Valin Group which builds on our track record of partnering with Chinese manufacturers for the supply of equipment and infrastructure," Gaines said.

Gaines said the agreements demonstrated the breadth and depth of FMG's relationships in China.

"Through this multifaceted approach, Fortescue has forged strong partnerships with customers and businesses in China that have significantly contributed to China's remarkable urbanisation and development and our company's contribution to the economic prosperity of Australia and Western Australia."

Forrest got a little annoyed towards the end of Monday's 90-minute analyst call, writes Barry Fitz 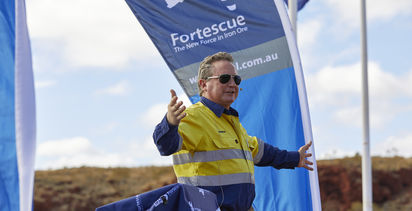