Home to the world's highest-grade-producing uranium mines, the Athabasca Basin in Saskatchewan, Canada, continues to reveal the true scale of its resources, with four major discoveries in the last decade. Geopolitical tensions stoked by the Russian invasion of Ukraine have tightened supply of uranium and now a new wave of exploration, harnessing knowledge gained over the past 15 years, is set to begin in the Basin 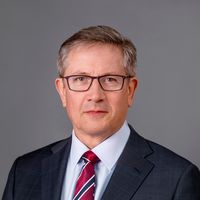 "Development companies taking a resource through to production provide a clear value proposition, but over the last decade investors in uranium have made even larger returns on the discovery," says Purepoint Uranium Group president and CEO Chris Frostad. "Purepoint is unashamedly an exploration company and with our portfolio, our partners, and our experience in the region, if anyone is going to make a major new discovery in the Athabasca basin, the odds are on us."

The company has a 20-year history in the region, following its 2002 formation. At that time, Frostad's brother, an exploration geologist working in Saskatchewan, alerted him to the untapped uranium potential in the Basin. Purepoint went on to stake over 400,000 hectares of mining titles and witnessed first hand the wave of exploration dollars and new techniques that flooded the sector following the uranium boom of 2004 to 2007, when prices reached $135 per pound. But while most companies exited the sector following the global financial crisis and the 2011 Fukushima nuclear accident, Purepoint hunkered down.

"We were pretty much the last man standing," Frostad says. The company was able to keep hold of its acreage and focus on exploring the Hook Lake project - in which it holds 21% and operator status - with majority financing coming from joint venture partners Cameco and Orano, two giants of the uranium space. Hook Lake remains the primary exploration focus, but the renewed interest in the sector from mining firms and financial groups has allowed Purepoint to make plans to bring the other properties to drill ready status. "We were able to pull the sheet off another 11 projects that have been waiting for us, like a time capsule, and really get back to work," Frostad says.

Recent discoveries have reinforced the Athabasca Basin's reputation for high grade deposits and expanded the spectrum of exploration targets. In July 2022 IsoEnergy announced a resource estimate of 48.61 million pounds of uranium at an average grade of 34.5% on a property that Cameco had previously held for years. While most 20th century exploration had focused on the unconformity, where the Basin's sandstone meets the underlying basement rock, major recent discoveries, such as Cameco's Millennium deposit, have been found well below that level.

"Exploration firms realised they were stopping short, we weren't drilling deep enough," Frostad says. "Over the last 10 or 15 years there's been so much more understanding and learning with regard to the nature of uranium deposits across the region."

At Hook Lake, on the southwest edge of the Basin, Purepoint will begin a new drill campaign in January 2023. So far, efforts have focussed on the Patterson corridor, a complex band of graphitic structures that run north-south through the property adjacent to and on strike with NexGen Energy's Arrow deposit, and Fission Uranium's Triple R deposit to the south, which collectively hold over 250 million pounds of uranium.

The company's deep understanding of this part of the Basin has led Purepoint and its partners to focus on the Carter corridor, to the west of the Patterson corridor. The company looked over its first exploration programme on the property and found that the 14-year-old drill results at Carter demonstrated evidence of potential mineralisation much deeper in the basement rock.

"That's what's got us and our partners really hyped up," he says. "We're going back to the Carter corridor with a new roadmap to begin drilling in January. We now see this as probably one of the best untested areas for a tier one deposit in the Basin." In this flat region with many lakes, exploration is best undertaken in the winter when the land is frozen. The drill results are expected to come through in March 2023.

Meanwhile, exploration continues apace at the company's other properties to the east of the Basin, with the Osprey Zone of the Red Willow property a particular focus. "We drilled Osprey in early 2022 and the great results prompted us to return as soon as possible. We are back up there drilling right now," he says. Having tracked consistent quantities of uranium along the target zone, the company is using helicopter drill teams to see how far the mineralisation extends to the north. So far it stretches nearly a mile. Current uranium price conditions make patient exploration possible. "I think we're in for a kinder, gentler ride this time," Frostad says. "I don't think we'll see a hockey stick in uranium prices we saw during the last uranium bull market but over the next couple of years we should see it continue higher to around the $75 mark." The firm has the current exploration funded and will choose the right moment to return to the capital markets.

Should Purepoint make a discovery, the obvious exit strategy is a sale to one of the existing well-established miners in the region such as Cameco or Orano. Relationships the company has built with the majors has helped them understand the sort of project that interests them. "The current producers, Cameco and Orano, require new resources to serve the demands of their existing facilities eight or ten years out and we look to deliver on that need," he says. "With the large amount of money coming into uranium exploration right now, I expect the Basin will see one or two significant discoveries in the very near future."

Purepoint Uranium Group Inc. is a uranium exploration company focused on the precision exploration of its projects in the Canadian Athabasca Basin (the “Basin”), the world’s richest uranium region.

Purepoint Uranium Group Inc. is a uranium exploration company focused on the precision exploration of its projects in the Canadian Athabasca Basin (the “Basin”), the world’s richest uranium region.