Building a supply chain away from dependency on Chinese rare earth refineries is crucial for the global economy, Chairman of Pensana Paul Atherley said.

"We have been worried about the resilience of the supply chain," he said. "Supply chain resilience is at the top of the agenda for world leaders." "We can't have everything relying on China."

Just as important as building a reliable supply chain is creating a supply chain that is sustainable, Atherley went further to say. "We are trying to establish independent and sustainable rare earth production in the UK with low embedded carbon," Atherley said.

Resilience in supply chains will be vital in meeting future demand, he continued. Demand for these rare earth materials is set to explode exponentially, according to figures from Adamas Intelligence.

The rare earths produced by Pensana will be used in permanent magnets which power electric vehicles and offshore wind turbines.

"What makes EVs go is not only the lithium-ion battery - the real power is in the permanent magnets," Atherley commented.

Production of Volkswagen's ID.3 range of EVs would "consume all of Pensana's production for a decade," he said.

Demand will be even greater once the growth of the robot industry is considered, he added.

"It is very clear that as China, the EU and the US industrialise and turn their factories towards robots, these robots will require permanent magnets," Atherley said.

"We [at Pensana] were blindsided by this information. Permanent magnet demands for robots will be bigger than electric vehicles."

Pensana is one of three major players on the global market that can bring these critical minerals to market - the others being Australia-based Lynas Rare Earths and US-based MP Materials, the Chairman said.

The Company benefits from a stellar Board which has led Pensana to a "stellar listing" on the LSE, Atherley said. The Board includes Steve Sharpe, an Executive Board Member of EIT Raw Materials; Dr Jeremy Beeton, Director-General of the London 2012 Olympic and Paralympic Games and Non-executive Director of John Laing; and Rt Hon Baroness Northover, formerly the Prime Minister's Trade Envoy to Angola and a Minister in the Department for International Development.

From Angola to the UK

Pensana will extract the rare earth ore from its Longonjo mine in Angola. The mine has a projected 20-year life of mine, and contains one of the world's largest rare earth deposits.

"It's a really exciting mine, with the ore body right at surface," Atherley said. The surrounding area also contains approximately 7,500 kilometres of unexplored high potential grounds, with potentially even higher grades.

The mine complex includes a 1.5 million tonne per annum flotation concentrator, as well as a mineral sands type roaster. Together, this has the capacity to produce 45,000 tonnes per annum of high-value mixed rare earths sulphate.

Commissioning of the Longonjo concentrator is targeted for late 2023, while commissioning for the Longonjo MRES is expected onwards from April 2024. Pensana is marking the stone laying at the Angola mine this month.

The mine will be powered by hydroelectric power.

"We have a 10-year contract with the local power company for hydropower at 2 cents per kilowatt hour," Atherley commented on. "It's a very low cost over a long period of time."

Longonjo also benefits from recently upgraded infrastructure in the form of a US$2 billion Benguela rail line connecting the mine to the Atlantic port of Lobito.

The port has also been refurbished, with all facilities upgraded, Atherley said.

Once loaded at the dock, the ore will be shipped to the UK, where it will be processed at the Saltend Chemical Park in the Humber Freeport.

The £150 million processing hub recently secured council approval. The facility will be built within Saltend Chemicals Park, which will provide many of the necessary utilities.

On the sustainability front, the Saltend processing hub will be using only green energy to power operations, Atherley commented.

Investing in the separation process is a way to make REE mining and production more profitable, Atherley said.

"We found in the REE business, the further downstream you go, the bigger the margin," he commented on.

The Company found that the UK was an excellent location to set up REE processing, due to the availability of chemical parks and the country's chemical engineering expertise.

"Companies set up chemical-based opportunities a long time ago, which have now been privatised and are owned by private equity firms," Atherley commented. The US hedge fund which now owns the Saltend Chemicals Park provides a "plug-and-play" service.

"All we have to do is operate the separation plant," the Chairman said.

"There will be a ground-breaking ceremony in Saltend in July, and continue into a 12 month construction period following financing."

Commissioning of the Saltend facility is expected in late 2023, with production planned for 2024.

Automobile manufacturers are also in talks with the British company, Atherley said.

"There are two things [auto manufacturers] worry about: transparency, and low embedded carbon," he said. "With hydropower in Angola and wind power in the UK, we're targeting a zero-carbon mine and low-carbon processing plant," the Chairman went on to say further.

Pensana is also in the process of finalising an offtake agreement with a large Asian group outside of China. The Group will purchase 50% of Pensana's production.

The Company expects to export primarily to Japan and Korea, with some exports heading to Europe and eventually to North America, he commented.

"Separation [of rare earth oxides] is where we take China right on," Atherley went on to say. "Every other country is supplying China in one way or the other," by sending them rare earth concentrates to process. 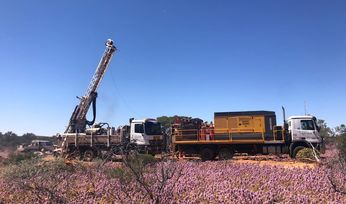 Scrimshaw to head up Peak