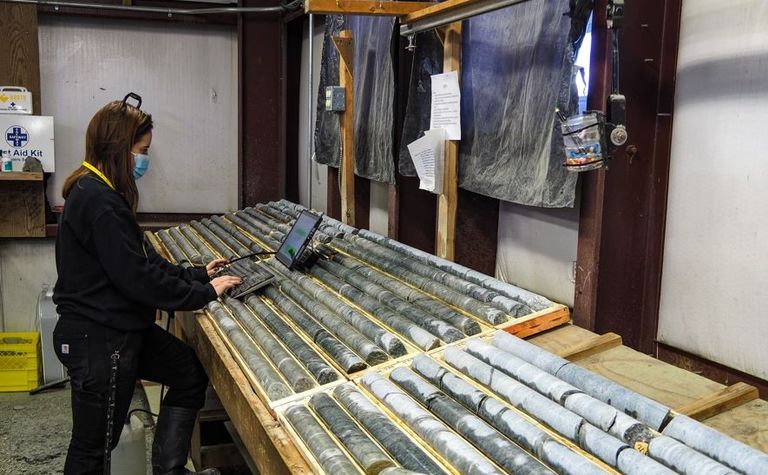 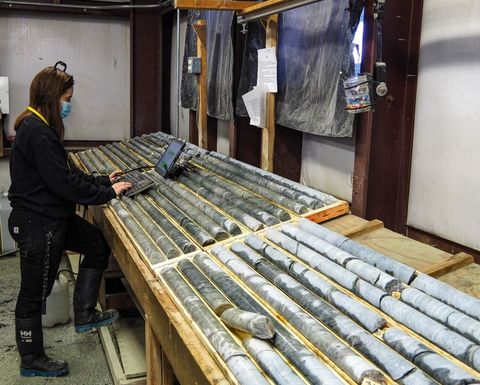 The project hosts a resource of 2.23 million ounces at 7.8 grams per tonne gold and Pickle Crow was one of Canada's highest-grade gold mines - historically producing 1.5m oz at 16g/t gold.

AuTECO's directors and exploration team have a proven track record of gold discoveries and creating wealth for shareholders, and in a ResourceStocks conversation with the company's chief executive officer, geologist Darren Cooke, it is hard not to share his contagious enthusiasm.

"In terms of future growth opportunities, the sky is the limit for us, and I guess this is the message we want to get across to current and prospective investors," Cooke said.

"It is a really exciting time for AuTECO. We are really advancing the project on two fronts. The first is to grow the resource, which is open in all directions, from its current level towards a new upgrade. 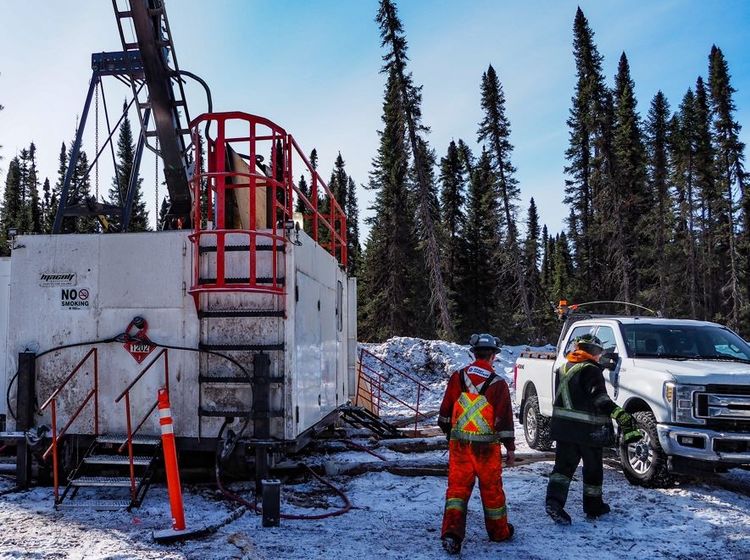 Exploration is best done in winter when the ground is frozen

"And the second phase of our growth is starting to unlock the regional potential outside of that resource area. Just recently we have been stepping out into areas that have had very little historic work done on them. And we are really proving the concept that we have a whole mineral district and not just a deposit.

"What we have is far more than Pickle Crow. It is the whole northern part of the Pickle Lake greenstone belt, and some of the early results we received from our winter drilling campaign included 5.5m at 18g/t at Talia in banded iron formation which is just a phenomenal result.

"And just to the north of Talia, at Cohen-MacArthur, we had a hit of 2.1m at 92g/t, which has proved the geological concept that there are parallel structures here which are well mineralised."

While Cooke is well known for his roles within Barrick, Newmont and Northern Star, it is the Bellevue Gold connection through fellow geologist Steve Parsons, accountant Mike Naylor, and executive chairman Ray Shorrocks that led to the establishment of AuTECO in Canada.

"They went to North America to look at assets in the hope of replicating the Bellevue Gold success. They came across this one and managed to get a great deal. And the reason for this was its fortuitous timing. There was a bit of a lull in the Canadian exploration scene at that time, but since we obtained the project, there have been some amazing things happening in that belt of rocks.

"The scale of the Dixie discovery by Great Bear has become evident and Kinross has just purchased that for more than $1.5 billion. That has really renewed interest in the Uchi belt, which also hosts Pickle Crow. Evolution Mining acquired Red Lake and has a substantial ground holding close to us, and we are now starting to see the majors moving back into the district."

In stressing that Pickle Crow represents a district rather than just a deposit, Cooke says that AuTECO took the approach from the outset that it was going to invest in the drill bit.

"We have put over 110,000 metres of diamond drilling into this project in the last two years. That has resulted in very rapid resource growth," he said, adding that he visits the project every quarter.

"We have three rigs on site at the moment. It is quite unusual for an Australian to believe that it is better to drill at -30 °C rather than +30°C, but it is. It can be quite swampy over there so our main drill season is in winter when the ground is frozen," he said. More rigs may be deployed closer to the winter months of October and November and Cooke says the company is expecting to see a reasonable resource increase around the end of the year.

"What we are working on now are plans to get into the underground so that we can infill drill and grow the current resource. We are lucky that we have inherited some reasonable infrastructure on site, so we are looking at low-capital options to get back underground for this infill drilling."

Cooke says AuTECO believes the integrity of the underground - which was mined from 1935 to 1966 - is still good. It was last dewatered around 1987 but AuTECO, as part of monitoring, put a camera down two of the shafts and they were found to be open and intact, even though they are full of water.

There is another approach which AuTECO is investigating with a view to getting underground, and that is the potential of creating an open pit, from which decline drives could take them to the historic workings, a possibility which had previously been overlooked.

"When the old-timers mined the underground, they were mining at about an 8g/t cut-off. They only focused on the narrow, high-grade veins. But there is another style of mineralisation that is hosted in banded iron formation (BIF), which is a lot wider than the quartz veins, but slightly lower grade. 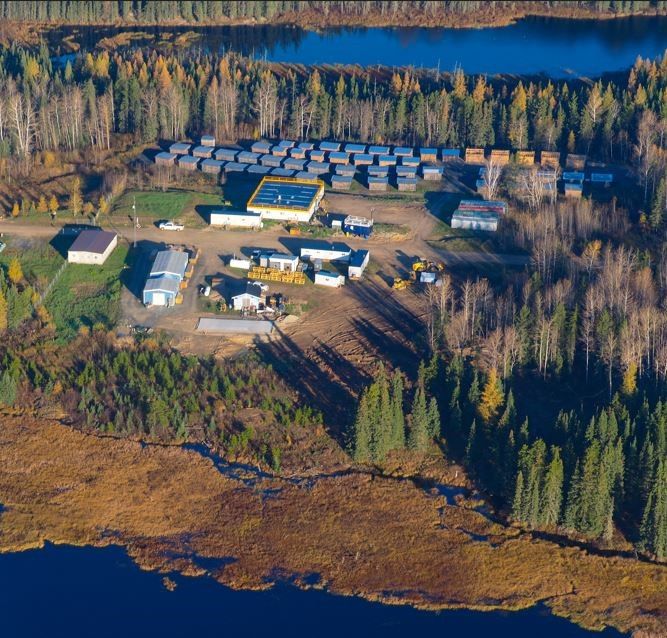 Looking down on the exploration camp at Pickle Crow

"We currently have about 300,000oz at 3.6g/t in resource in that bulk material, which is potentially amenable to open pit or bulk open stoping. One option we are looking at at the moment is doing an open pit to start off, then developing a decline at the base of that, which would give us access to the underground."

Cooke says this would offer AuTECO the possibility of generating some early cashflow which could be reinvested into the underground development. This approach would be less capital-intensive than rehabilitating the 1930s mine shafts.

"So the grand vision is to get back underground but to potentially use the open pit to really leverage that. We are lucky that we have a plant, and, unlike many other exploration plays, it gives us something of a head start, if we wanted to go down the path of a low-capital start-up."

Another positive aspect to Pickle Crow is that one of the historic stockpiles has about 2,000oz grading about 45g/t. And there are lower-grade stockpiles too - Cooke says historic reports suggest there is about 35,000oz in historical tailings, which are of a moderately low grade. But these stockpiles give the company an opportunity to provide some of the cashflow to drive the end game.

"When we came to this project, without bias, we looked at it through a totally different lens compared to what had been considered historically. It had always been considered a narrow, underground, vein-hosted system. But it is far more than that because of the potential for bulk mining. Pickle Crow was one of Canada's highest grade historic mines and has a good track record of producing high-grade gold.

"We have a really bright future here. My view is that we are in some of the hottest exploration ground in Canada and, with the drill bit, we are starting to prove that we have an entire mineral district and not just a deposit called Pickle Crow," Cooke said. Company cashed up for further growth 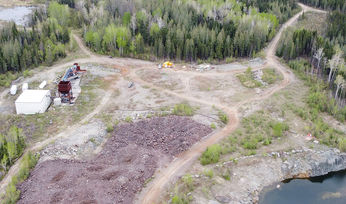 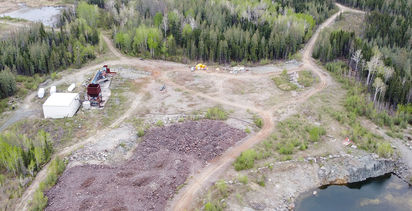