De Grey Mining's game changing Hemi discovery in WA’s Pilbara region will take a big step towards production with the release in September of a scoping study that will lay the groundwork for a what is expected to become one of Australia’s top gold mines. 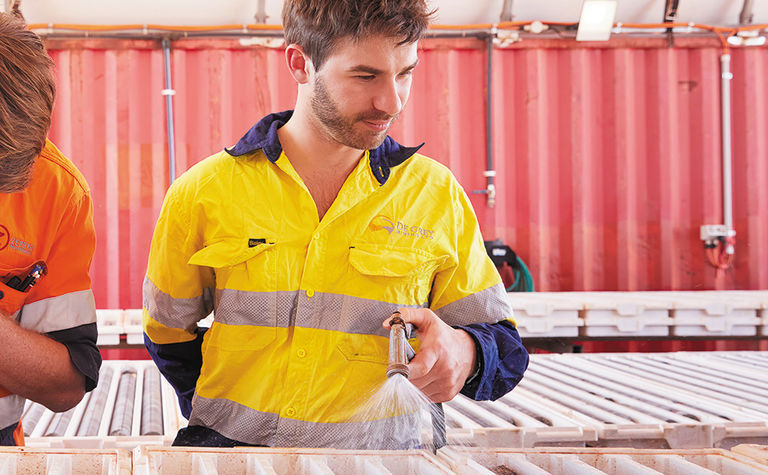 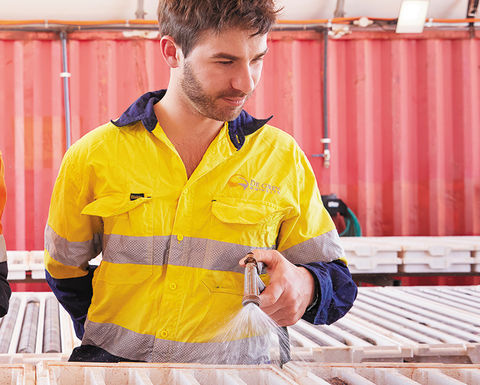 All that remains to be officially revealed are the dimensions of Hemi and its multiple satellite structures, with the smart money betting on output of more than 300,000 ounces a year, over at least 10 years at a cost of less than $1,000 an ounce, a true tier-one project.

De Grey management, led by chief executive Glenn Jardine, is careful to not get too far ahead of the scoping study or the feasibility studies to follow, but that's not stopping the banking and stockbroking community from doing its own calculations.

The latest analysis from Bell Potter highlights just how big Hemi could become, and how it could rewrite the geological handbook for Pilbara gold - and perhaps elsewhere in Australia given the unique nature of the discovery.

What caught the eye of analysts at the broking firm was the better-than-expected maiden resource for the project reported by De Grey in early July, with the 6.8 million ounces in Hemi lifting the broader Mallina gold project (MGP) to 9m/oz.

Bell Potter said the initial resource for Hemi was at the upper end of its expectations and more than quadru-pled the size of the MGP.

Other positive factors noted by Bell Potter in its latest assessment of Hemi included:

To those points can be added the attractions of the location, 60 kilo-metres from Port Hedland and all the services on offer there, plus nearby electricity and gas lines, as well as abundant water for processing.

A lot has been written about Hemi since De Grey first revealed the significance of its discovery early last year, when it reported thick and rich gold intersections from two holes 640m apart.

But the date of that initial report helps explain why some investors missed the significance of the discov-ery because February last year was also the start of the Covid-19 outbreak that was to dominate mining industry news flow for the rest of the year, and into 2021.

Some investors might have under-stood that a potentially major discov-ery had been made, but the relatively modest uplift in De Grey's share price from 5c to 21c a week after the origi-nal report was hardly a stampede for the stock. 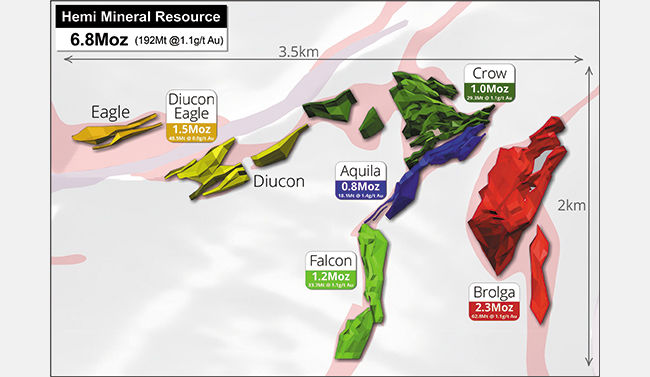 It wasn't until early March that De Grey's technical team recognised that they were drilling into something quite different, a gold-rich intrusion rather than a conventional shear zone - which is the most common gold-bearing structure in the WA gold industry.

As the significance of the discovery became clearer and drill results tum-bled in, De Grey shares went for a ride, hitting a high of $1.55 in September last year, nine months after the first report, a 3,000% rise using a 5c start-ing price.

Jardine said that the Hemi discovery had the potential to redefine gold exploration in the Pilbara and possibly elsewhere in Australia.

"We've known for some time the potential for gold in shear zones on our ground, but Hemi has changed the way we explore, with remarkable results," Jardine said.

"It's also possible to say that we re-ally have just scratched the surface as far as understanding and discovering intrusion rich gold structures, because we have 150km of prospective strike to test."

De Grey's executive technical director, Andy Beckwith, is best at explain-ing the nature of the intrusions being uncovered in the Hemi area.

Rather than mineralised fluids rising to the surface along shear zone cracks, the Hemi structures appear to have moved up "like the blobs in a lava lamp".

For younger readers, a lava lamp is kitsch lightning device in which blobs of paraffin rise and fall in a water-filled container that has a heating coil at the base. Cute when invented, not many people admit to owning one today.

But the fact that Hemi is largely made up of gold-enriched intrusions such as Brolga (the richest found so far), Falcon, Crow, Aquila, Diucon and Eagle, and not traditional shear zones goes some way to explaining why it wasn't discovered decades ago.

Being different means that old-tim-ers would have walked across Hemi as far back as the 1890s, as they made the long trek from WA's Kimberley dis-coveries to Kalgoorlie, without notic-ing anything because Hemi is buried under mud uaap to 40m deep left by the river systems that crisscross the area, including the Yule, Turner and De Grey.

Mineralised outcrops and sheer zones were encountered over the years, but yielded small amounts of gold.

The big breakthrough came when De Grey's technical team realised that the richest gold-bearing structures were intrusions and not shear zones.

Jardine said early air-core drilling as far back as 2007 over Eagle failed to reach bed-rock because of the transported cover.

"But the latest air-core drilling over Diucon and Eagle comes with the knowledge gained from the discovery of Hemi, so we knew what to look for," Jardine said.

What Hemi taught De Grey is that the geological signals from above the intrusions, including magnetics and gold assays, are weak.

"Over Eagle and Diucon we inter-cepted relatively low-grade gold, but because we had discovered Hemi we drilled deeper and made the discoveries," he said.

Those shear-zone discoveries are today seen as the satellite deposits to the major intrusion-based discoveries in the Hemi area.

"We started by expanding on the shear-zone discoveries, with the big change for us being the discovery of Toweranna on the western side of the project area," Beckwith said."

There was limited mining on Tow-eranna in the 1960s, but we didn't recognise it for what it really is, an in-trusion.

"It's a circular intrusion that can be classified as a diorite, 250m in diam-eter, and it's when we drilled that we rapidly built up the resource to half-a-million ounces and that's when we recognised that these structures grow very rapidly.

"The results from Toweranna caused us to re-think earlier work and to go back and look at old drilling re-sults and old data and that's when we decided to go back into the greater Hemi region."

Just how rapidly Hemi is growing can be shown in the most recent drill-ing, which has been adding 450,000oz a month to De Grey's resource base because of the high level of ounces of gold per vertical metre, with Brolga the best of breed at 9,000oz per me-tre, a measure which almost certainly ensures that it will be the starting point for mining at Hemi.

Beckwith said there was a lot of po-tential to expand the Hemi resource now that the intrusion-style orebodies in the area were better understood and with encouraging signs of the structures continuing at depth.

"Good infill and extension drilling results have been reported since the assay cut-off date of May 17 for the maiden resource," the broker said."All deposits remain open at depth and along strike, with 13 rigs active at Hemi and regional targets."

De Grey Mining Limited is a Western Australian gold explorer and project developer which has made one of Australia’s most exciting new gold discoveries at Hemi in the Pilbar.

De Grey Mining Limited is a Western Australian gold explorer and project developer which has made one of Australia’s most exciting new gold discoveries at Hemi in the Pilbar. 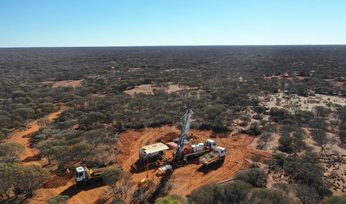 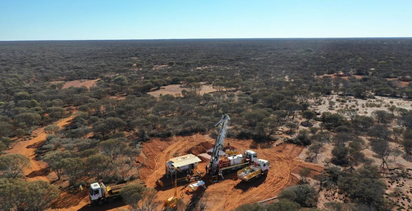