THE CEO of leading Canadian wealth manager Dundee Corporation recently told an investor audience it was the “best time in at least a generation to invest” in the junior mining sector and the canny firm’s first significant Western Australia gold investment underlines why it sees tremendous value in the junior space. 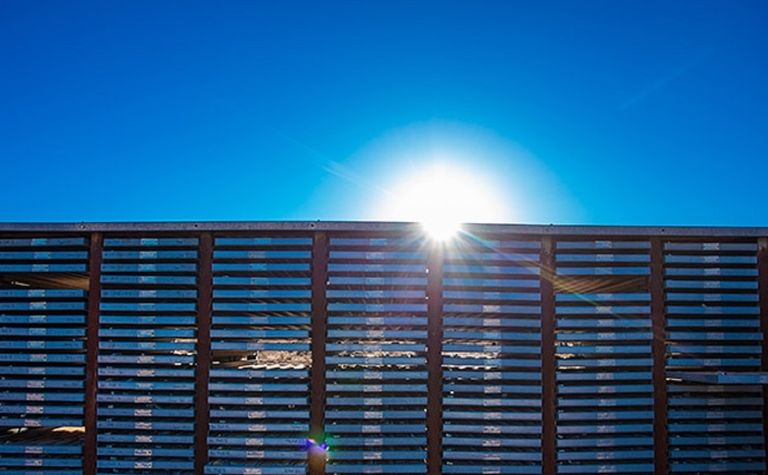 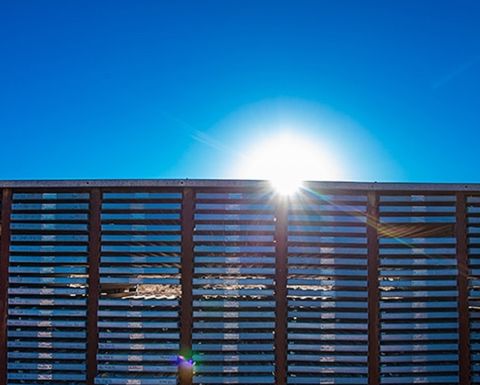 "We believe a balanced portfolio of carefully selected junior mining stocks will dramatically outperform over the next 5-10 years," Dundee's Jonathan Goodman said on a webcast.

Saturn Metals managing director Ian Bamborough believes the company's appeal to Dundee lies in both its near-term upside - as it drills aggressively to outline potential for a multi-million-ounce, near-surface gold deposit near Leonora in WA's north eastern goldfields - and the longer term potential of its under-explored, 1,000sq.km landholding in a region with a circa-85Moz gold endowment.

Dundee started looking at the WA explorer last year ahead of it upgrading the JORC indicated and inferred resource to 24.5 million tonnes grading 1gpt for 781,000oz in October.

Saturn has since shown high-grade drill results from the hanging wall side of the now 600m-wide mineralised corridor at Apollo Hill continue at depth and along strike, encouraging a major step-up in drilling activity at the site. A planned 50,000m program has capacity to deliver an updated resource late in 2020 and continue into 2021.

Bamborough says the methodical build-up in exploration since Saturn's early-2018 IPO on a deposit producing significant, consistent widths of mineralisation has so far delivered 9.8oz for every metre drilled at a discovery cost below A$20/oz.

"My initial goal with this when Saturn listed was to get to that 1Moz mark. Based on the work we've done now, and the results, I think in this one single spot there is an opportunity for 2Moz within the top 250m … and compared to some of my ASX-listed peers the potential here is for the ounces to exist in one single, simple, big selective mining unit," Bamborough says. 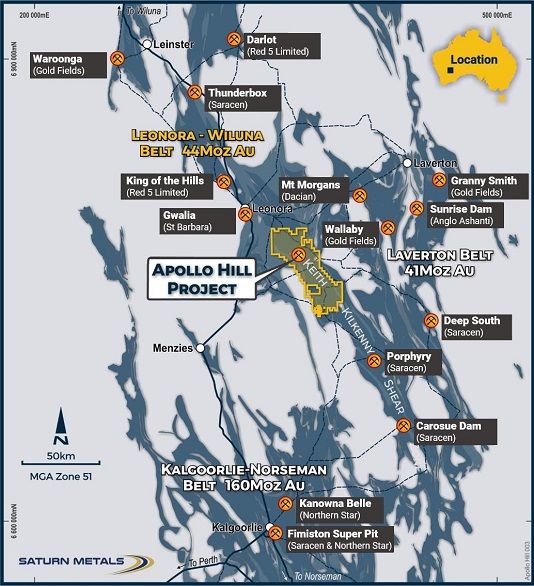 "We do own 1000sq.km around this deposit and to put the youth of that ground in context, when we listed a couple of years ago one of the first things I had to do over 75% of the ground was first-pass, high-resolution magnetics. That's something people were doing in the goldfields 25 years ago when I first turned up as a young lad from England."

The message is amplified by initial high-grade results Saturn has reported from first-pass drilling at Calypso on the Keith Kilkenny shear zone only 3.5km east of Apollo Hill. Major Japanese trading and metals group Sumitomo, not known for greenfields exploration, is drilling nearby, and privately-owned Salazar Gold is another conducting grassroots activity in the district.

Canadian resources investor Sprott says Saturn is a "rare Australian explorer … with an industry-leading 77% of cash going into the ground [since IPO]".

"Geologically, the [Apollo Hill] system has now opened up in the hanging wall … and put simply, would benefit from [the] step-change in drilling," Sprott says in a recent note.

"Simplistically, a 50,000m program would cost about A$8 million. 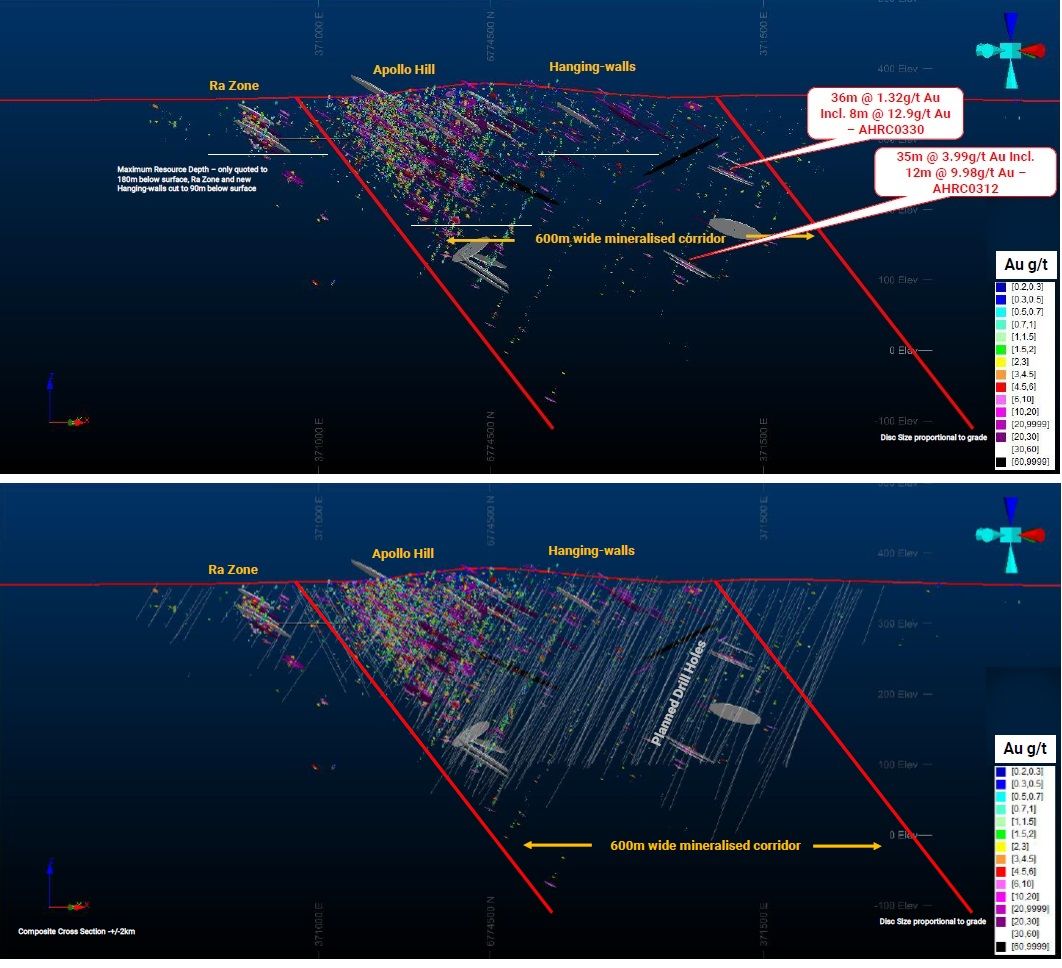 Sprott is one group that sees parallels in the development path of Saturn and ASX-listed Capricorn Metals, advancing a 100,000ozpa-plus openpit/CIL gold project off 2.1Moz (0.8gpt head grade) resource and 890,000oz reserve at Karlawinda, 70km from Newman in WA's Pilbara region. Capricorn, which has a current market value around A$670 million, is looking to start production next year. Capricorn is chaired by Mark Clark, who built Regis Resources into a multi-billion-dollar WA gold miner on the back of its Duketon mines and reserves with a sub-1gpt average grade.

"We think the recently discovered hanging-wall lodes at Apollo Hill will lift the existing 781,000oz 1gpt resource to 1-1.5Moz or, more speculatively, toward 2Moz. The deposit is free milling even to 300um grind, and should have a strip about 5:1, so is similar to Capricorn's Karlawinda," Sprott says.

"The opportunity is that Saturn trades at US$33/oz compared to Capricorn's US$277/oz."

Dundee's support for Saturn's most recent capital raising helped the junior top up its treasury (A$5 million at the end of June) for its FY21 push to cement Apollo Hill's standing in the Leonora-Laverton area. As well as the major new drilling program, the company is expanding metallurgical testwork and will aim to add to the district picture with follow-up work at Calypso and other promising satellites.

"The simplicity is the beautiful thing about this [Apollo Hill] at the moment," says Bamborough, an experienced geologist and executive who spent 11 years with Newmont Mining.

The main zone gold structure at Apollo Hill has been described as a "lateral jog" between northern massive tholeiitic basalt and southern mafic schist stratigraphies; the lineament ‘shattering' host basalt (brittle) and schist (ductile) host rocks to form a wide area of low-grade mineralisation within a pervasive, typical Archaean silica-sericite-albite envelope. Higher grades in the thicker interbedded dolerite and basalt hangingwall sequence is being put down at this stage to the better rock competency contrast to focus mineralisation.

Generally vertical mineralised main structures evident in drill core contrast with higher-grade sub-horizontal hangingwall structures intercepted in holes such as AHRC0330 that returned 8m of 13gpt from 126m, then 5m of 8gpt from 111m . 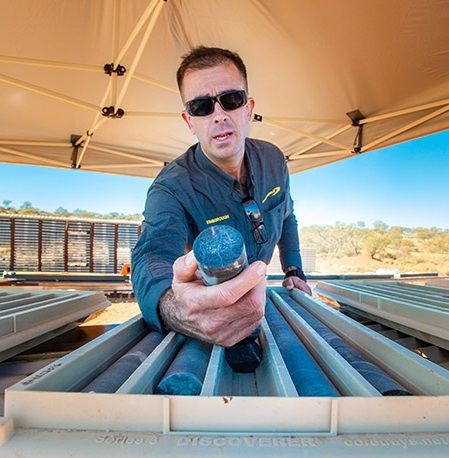 Ian Bamborough: "If you're in a big gold system it's about having the confidence to drill, and I think your answers will come"

"As we've increased the volume and density of drilling we've not only enlarged the resource but increased our confidence in what is sitting within that [600m-wide, 200-250m-deep] envelope," Bamborough says.

"We've done 50,000m of drilling to define a large resource and an even bigger mineralised system. The hanging-wall drilling is only now being expanded. There is an opportunity to lift drilling rates to take the resource to another level. So that's the drilling we've got planned now - 50,000m. That's two rigs for 12 months or if I do it with four rigs maybe I can bring that down to six months.

"It's Archaean greenstone; these systems usually give, and give, and give. If you're in a big gold system it's about having the confidence to drill, and I think your answers will come, and it will throw up some nice surprises along the way.

"If this [resource average] was once a gram, the average of everything out there [hangingwall] at the moment is about 1.36gpt. So it's maybe 1.1-1.15gpt overall. The other beautiful thing is as we infill the strip ratio lowers and even at lower cut-off grades, so down at 0.3-0.5gpt, we're still seeing really good gold recoveries from test work to date. If you can move that dirt out of a big pit, and it just pays for itself, your strip ratio is down and your ounces are up. It can support a bigger mill, and your unit cost gets pushed down."

More drill-core testwork is planned, but Apollo Hill has been described as "metallurgically dreamy" so far - "a key ingredient for bulk low-grade assets", says Sprott.

"Firstly, the top-of-fresh-rock ranges from 10-40m, providing some early-years oxide. Fresh rock metallurgy is exceptional, with more than 60% gravity recovery, and 92% recovery achievable at just 300um, lifting to 97-98% at 90um," it says.

"Composites averaged 0.73g/t, with about 85% recovery achieved from a 0.37g/t sample, allowing flexibility to lower cut-off grades to maintain a low strip. Ore is hard but not unusually hard at 16kWh/t BWI, and has low cyanide consumption at 0.22kg/t (that is, less than US$20/oz) and low 0.55kg/t lime consumption. There is potential for a heap leach, with 69-77% recovery at 4-8mm crush, including 67% recovery after just two weeks. Overall investors should expect low opex (cyanide, lime, crush, gravity) and reduced capex (coarse grind, smaller tankage)."

Bamborough says recognition of Apollo Hill's emergence as a potential large-tonnage, low-strip openpit mining project with simple metallurgy and other levers such as a nearby gas pipeline is growing, as is the prospectivity of its large landholding.

"There is that potential for it to be a very simple centre of gravity, if you want to work in M&A scenarios … we have a baseload there that could be a pivotal centre for growth in the region," he says.

"We're 53km from St Barbara's Gwalia mill, 73km from AngloGold's Sunrise Dam, and Mt Morgans is about 90km away. We've run the ruler over outside milling options but it becomes really obvious you'd be robbing Peter to pay Paul, and Apollo hill has the potential to be big enough to support its own operation.

"It really just makes sense to keep growing the asset as quickly as possible and work towards building that big mill in a central location on a belt that has the potential to support a district-scale camp." 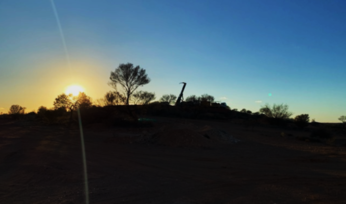 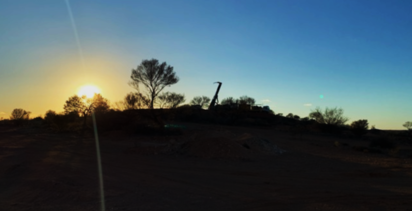