It's back to the future for North Carolina lithium developer

Location, it’s often said, is everything in mining. But few locations tick as many boxes for an aspiring lithium producer as the Carolina Tin-Spodumene Belt does for cashed-up developer Piedmont Lithium (ASX: PLL). 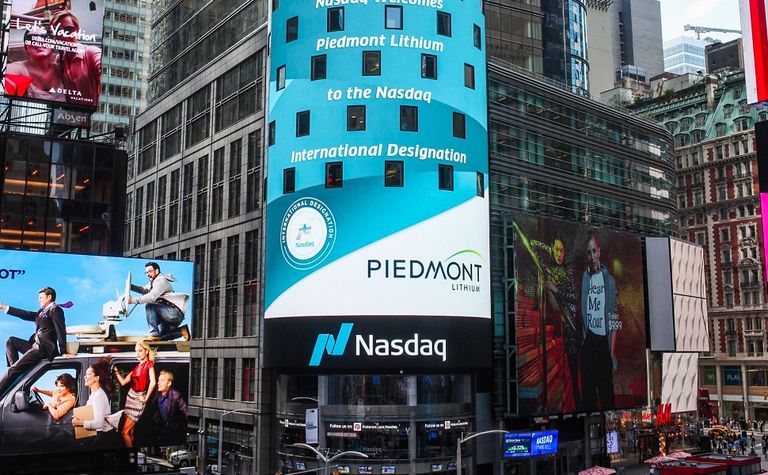 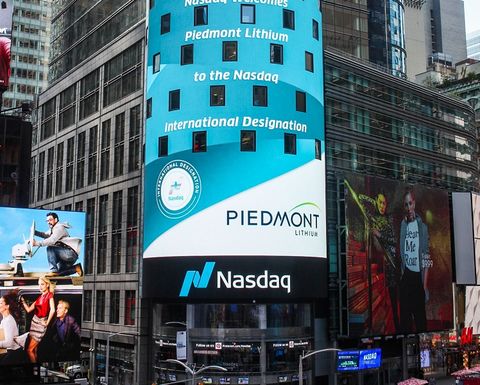 Location, it's often said, is everything in mining. But few locations tick as many boxes for an aspiring lithium producer as the Carolina Tin-Spodumene Belt does for cashed-up developer Piedmont Lithium (ASX: PLL).

The company is on the verge of completing a landmark drilling program on the historic belt once the world's primary source of lithium and today still host to two of North America's significant lithium processing facilities (operated by Albemarle and FMC). The drilling will feed JORC-compliant indicated resources and a maiden project resource for the 100%-owned Piedmont project into the company's scoping study which will be completed in the September quarter this year.

From there Piedmont expects to start submitting development permit applications later in 2018 as it looks to fast track progress at a site that offers up much valuable historic data and plenty of relevant economic guidance on capital and operating costs.

The indications are that Piedmont faces few barriers to its goal of a being a low-cost, US spodumene-lithium producer - a unique position - in a rapidly inflating market for the battery mineral.

It has assembled a strong management and technical team, has good cash reserves (plus US$10 million this month), and access to the Australian and US capital markets - the latter via its OTC-Nasdaq (PLLLY) dual listing - to enable it to convert the opportunity into a high-value enterprise.

"Our maiden resource announcement will represent a significant investment of time and resources invested in the project to date," Piedmont managing director, Keith Phillips says.

"The resource, which is expected to be within the exploration target, and our very significant land position on the CTS Belt, would position Piedmont well compared to other projects that are in late-stage study, construction or production.

"As a management team we are confident that our project, with its location and other inherent advantages when compared to brine project in Nevada or South America, will deliver far superior returns while also having lower technical risk for construction and start-up."

Piedmont has secured about 1,200 acres on the CTS Belt and wants to establish itself as the dominant presence in the district through further astute land acquisition and development of its proposed integrated lithium operation. Phillips says discussions with neighbouring landowners continue. 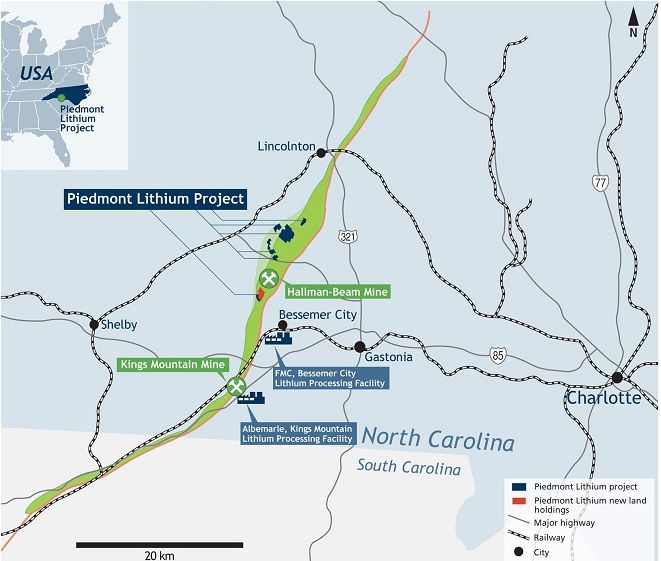 The company has published an exploration target of 10-15 million tonnes at a grade of 1-1.25% Li2O based on more than 15,000m of past drilling and exploration work. The drilling to date has returned high lithium grades in more than 90% of holes completed, and known mineralisation remains open.

Piedmont's current 20,000m drilling programme, due to conclude in May, has two parts, with the first 13,000m contributing to the JORC indicated resource assessment and featuring a number of infill holes wrapping up this month. The other 7,000m is being directed towards additional inferred resources as well as new drill targets in areas at some of Piedmont's recently acquired ground.

"It's important to note that by the 1970s the United States Geological Service estimated that the entire Carolina Tin-Spodumene Belt contained over 700 million tons at grades similar to the range in our exploration target,"

"The two major historic mines in the region [Hallman Beam and Kings Mountain] contained about 30 million tons in the 1970s at slightly higher grades.

"Each of these mines operated within a smaller land position than we currently control in North Carolina.

"Resource definition and upgrading will remain an integral part of our overall business strategy as we advance the project into later stage study and eventually construction. We hope to increase and upgrade resources over time given the underexplored areas within our core land package and the new properties that we have recently acquired."

The right rocks are, of course, a vital ingredient in the allure of the North Carolina location.

Forbes magazine ranks North Carolina second in the US for attractiveness to business and industry, with no state mining royalties, first-rate infrastructure, including competitively-priced power and available mining and processing skilled labour, and established nearby lithium downstream industry. 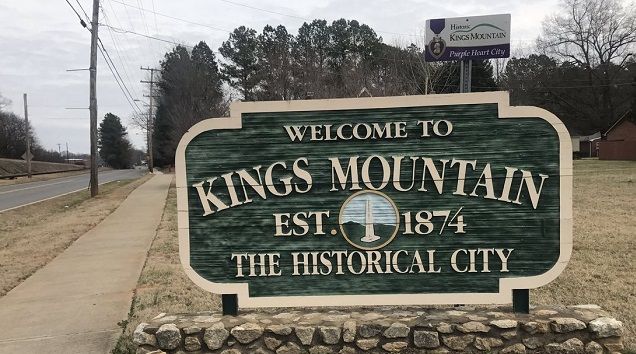 Phillips says the physical advantages should translate into significant cost advantages compared to most other brine and hard-rock production centres.

"We have access to very low cost natural gas, power, roads, rail and mine service infrastructure which is not available in remote regions of South America or Western Australia, which should keep key input cost low relative to brines and other new spodumene conversion regions," he says.

"We are looking at a technically simple mine and process route - that were the basis of the mines and conversion in the region historically from the 1950s till the 1990s - whereas brines tend to be more technically challenging, and we're positioned in an area with an immense amount of low cost and qualified technical personnel within the Charlotte Metropolitan region. That compares with the fly-in/fly-out requirements in places like northern Canada and Western Australia.

"The region also has a favourable climate with year-round construction season so we expect a relatively quick construction and ramp-up period whereas brines are typically much longer to construct and ramp up production which significantly affects the project IRRs while also being technically more challenging."

Phillips says Piedmont is on private lands, meaning it has no exposure to the federal Bureau of Land Management and its project approval regimes, and doesn't need the major water permits that delay Nevada brine plays.

"Owning the properties outright means Piedmont is substantially free of royalties, which is not the case in many mining regions, in particular in Chile where the royalties can be as high as 40%," he says.

There is study work ahead to confirm capital and operating costs around the preferred Piedmont project shape, but potentially, a relatively low capital cost and comparable operating cost (including the lack of royalties) could put the venture in a rare space for hard-rock lithium operations - comparable to South American brines.

"And we have the ability to go straight to hydroxide, whereas the brines will have an extra step, and cost, in this process," Phillips says.

"This is all set against a backdrop of being located in the heartland of the Eastern USA and positioned as a strategic source of supply to many of the manufacturing plants in operation and being planned on the Eastern Seaboard which include the likes of GM, Ford, BMW, Mercedes, Toyota, and Nissan.

"North Carolina is one of the largest manufacturing states with the industry contributing over 20% to GDP and being host to not only Albemarle and FMC Corporations operations in the region but that of many other heavy industrial manufacturing companies.

"It is also a large mining and aggregate quarrying state with some large industrial minerals mines close to our intended operations.

"So we see North Carolina as very development friendly, for both mining and manufacturing.

"We feel that being located in North Carolina's permitting regime is an advantage ahead of many other jurisdictions in the world."

"As could be expected from a region which pioneered the conversion of lithium ores to battery grade products for over 50 years, our initial testwork is progressing very well and we expect to update the market on our concentrate metallurgical test work soon and our battery grade lithium chemical test work later in the year," Phillips says.

As well as prime access to low-cost gas, power and people, Piedmont also sees competitive access to reagents for concentrator and conversion plant activities as an advantage.

"It's also worth pointing out that the historic mines in the area were able to monetize high-quality feldspar and quartz by-products given the low-cost transportation infrastructure and access to large US east coast markets, and we expect to evaluate this by-product potential later in 2018.

"With our strategic position in the US, expected low- cost position and low technical and delivery risk to potential customers, we believe we are very well placed to develop a strategic and high-margin lithium operation." 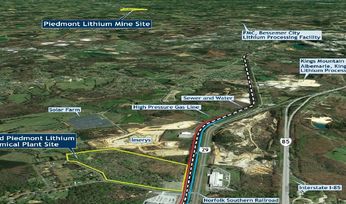