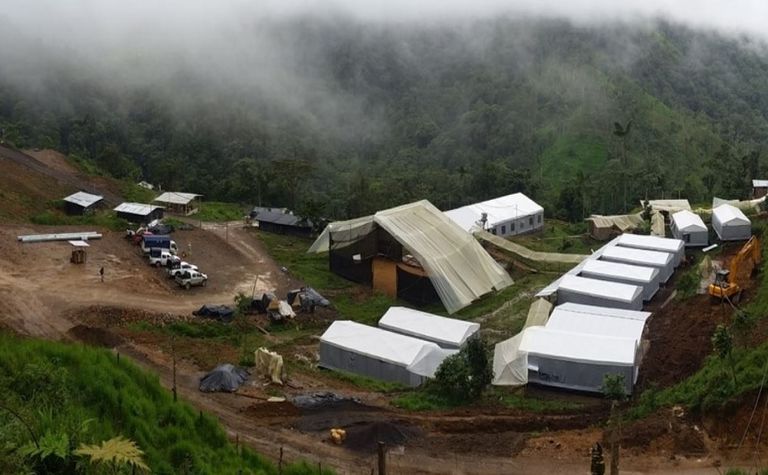 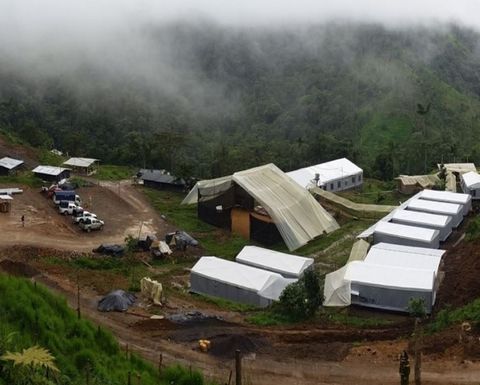 The Alpala camp set up has seen major growth since 2015

Interest in the company and its high-grade Alpala deposit is growing and set to intensify, thanks to the company’s imminent listing on the TSX and pending transition from AIM to London’s Main Board.

CEO Nick Mather has seen scepticism from investment managers turn to attention – and the company is yet to produce its first maiden resource statement, although there will be seven rigs “working feverishly” in the coming months to enable this before the end of the year.

The Alpala deposit is growing with each new drill hole, with recent highlights continuing the trend of 1km-long intersections, such as Hole 23R which returned 1,030m at 1.16% copper equivalent (0.59% copper and 0.90 g/t gold).

SolGold’s share price has risen more than 1,100% in a year and Mather said the turning point was gold miner Newcrest Mining’s (AU:NCM) and Maxit Capital’s involvement, starting with a capital raising in September and a further US$41.2 million placement in June.

“All the problems the market saw before their arrival – that we were in Ecuador, they didn’t know about the copper market or our management skills or our technical capability, or the depth of the mineralisation … Newcrest’s arrival removed all of that doubt and enabled the company to get funding in and soar,” Mather said.

He said luckily for those who had doubted SolGold previously, he believed there was more upside to come as Alpala revealed further potential and the company was yet to touch a further 22 targets it had identified and was securing tenure in Ecuador.

“It’s a very exciting time as we unravel more and more geologically about Cascabel and Alpala in particular – and as we further refine the blueprint we have for exploring it and apply it like a cookie cutter all the way down through Ecuador,” Mather said.

He said SolGold believed the world would be in short supply of copper by the end of 2018 due to the metal’s use in electrification, from connecting wind and solar farms to powering electric vehicles.

“In our view it’s the best base metal investment you could make,” he said.

“We’re building a world-class copper company and for that you need outstanding projects and very high prospectivity, and a portfolio of projects that goes all the way from raw exploration right through to mines.

“We are working to get Cascabel and its key deposit Alpala into mining status as soon as possible.

“So we’re in the right commodity and you need the right people looking for it – and we have a spectacularly accomplished team.”

He said another key ingredient was experience in mine development, which block caving specialist Newcrest brought to the table.

“We’re in the Andean belt, which produces some 48% of the world’s copper and that’s why we went there,” he said.

“The government is fantastic, the geology is predictable, the grades are good and Ecuador now is developing a mining culture.

“It’ll take a couple of years to get to a development decision, but that’s quick for a project of this scale – we’re talking about something we think could be huge with a great copper grade, plus gold, and without the capital cost imposts you’d have to tolerate if you were developing something in the high and dry Chilean Andes.”

He said Cascabel had access to water, a port two hours away, a sealed road running through the tenement and was less than 25km from the international South American hydroelectric power grid.

“This project is big, it’s rich and it’s blessed with a whole lot of logistical advantages that will save us billions, and that’s really important because the project will stand out from an economic point of view and be a frontrunner in the competition for development capital,” Mather said. 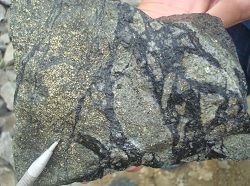 SolGold hopes to replicate its Cascabel exploration success at a further 38 granted concessions in Ecuador (Hydrothermal breccia from the Sharug project, one of the 38 new concessions, pictured left) and the competition for ground is heating up.

“It is the hottest mining destination in the world right now, bar none.

He noted BHP had tried to farm into Cascabel in 2016 prior to Newcrest and Maxit Capital’s investment, but was resolute that SolGold would develop the project itself.

“We’re not giving the upside away to someone else,” he said.

“The important thing is that we’re incredibly dedicated to this cause, I’ve got a lot of my own money invested in it.” 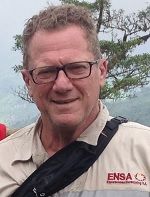 Over the coming months, the market can expect to see a plethora of results as the number of drill rigs increase and also drill more efficiently through deviation drilling.

“We’ll just go down existing holes and Christmas tree off them, it’ll save a lot of time and a lot of money,” Mather (pictured right) said.

“We wouldn’t be surprised if we put together in excess of 60Moz gold equivalent, or 10 million tonnes of contained of copper metal – these are world class tier one deposits that transcend metal price cycles and last inter-generationally.”

He expected the milestone TSX listing and switch to the Main Board in London would attract large investment banks from both an equity and a debt point of view.

“The other really important development will be the inclusion, because of our market cap, on various indices,” Mather said.

“It will mean that we’ll start to get a lot of institutional attention and there are already a number of large English and American institutions coming onto the register and we expect to see that trend continue.”

He believes the massive rerating shareholders have seen in SolGold over the past 12 months could be replicated on an even bigger scale as discoveries continue and the company brings SolGold to feasibility stage.

“Notwithstanding the fact that our market cap is already over £500 million, it’s got a lot further to go because we can see considerable upside in the company share price just from Alpala and Cascabel, let alone the other projects we’re working on,” Mather said.

Investment agreement, PFS and offtake agreements some of 2020 goals 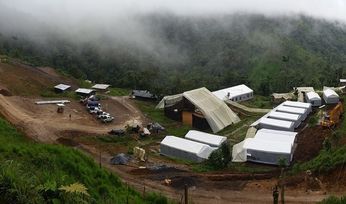 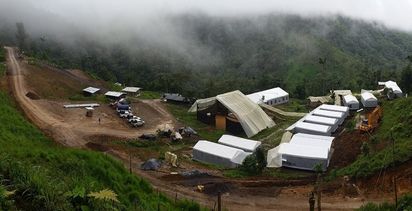