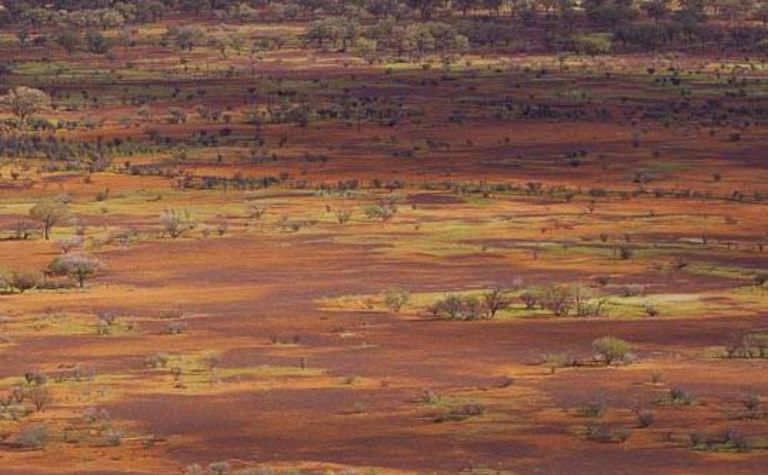 The international competitiveness of Australia's dominant mining state is not just a point of concern for the local government and industry players - it's a national imperative.

This prominence in the nation's macroeconomic security strategy implies the existence of a bedrock of certainty and support, even for speculative investment areas such as the junior minerals exploration scene. After all, if a society ultimately depends on a high-risk industry, it may be reasonable to assume that the society is obliged to de-risk that industry.

However, it can be surprisingly difficult to get down to the core motives and goals behind what seems to be a universally popular effort to promote Western Australia's economic attractiveness. WA is clearly a place where international players want to be, but perhaps this very fact is at the root of all the anxiety about staying on top. Managing an ongoing success is a more complex process than managing a sideshow of negligible importance.

The WA resources scene enters the midpoint of 2015 on the heels of some notable accomplishments and discouragements.

This year's Fraser Institute survey resulted in Finland displacing WA as the world's most attractive jurisdiction for mining investment. WA fell by four spaces to fifth place, with the rest of the top-10 filled out by windswept North American provinces. WA also dropped from sixth to tenth place out of 122 jurisdictions in the survey's policy perception index.

To get a dollars-and-cents angle on what this yardstick of industry sentiment means for WA investment going forward over the rest of 2015, RESOURCESTOCKS* spoke with the Chamber of Minerals and Energy of WA's manager for economics and tax Shannon Burdeu.

"The concern is that WA is trending in the wrong direction, and I think perceptions are a big thing with investment in mining and how safe a jurisdiction is - that's something that the policy settings really do influence," Burdeu said.

"Now is really the time for state and federal governments to not be complacent around policy initiatives and make some genuine change to attract investment and keep WA and the resources sector as key drivers of the economy."

Burdeu echoed the CME's concerns about international investor perceptions of WA as reflected in decisions to trim the state's economic profile below an AAA rating.

"It is quite concerning that several of the key ratings agencies downgraded Western Australia's rating almost two years ago now. That was heavily based on the state budget, the rising debt levels and commentary on the state government's political will to reverse that trend," she said.

"International credit ratings agencies have that independence and respect in the global marketplace, and investors do look at those credit ratings when looking not just at companies but jurisdictions, where to invest their money.

"Obviously, there're other concerns with a state budget that need to be balanced, but in terms of attracting investment, we do see that [an AAA rating] as a critical factor that investors do look at."

Other concerns in WA this year were largely focused on the state budget and royalty rates, with lobby groups such as the CME, the Gold Royalty Response Group and the Association of Mining and Exploration Companies breathing a sigh of relief after WA Mines Minister Bill Marmion confirmed that some $A560 million of royalty revenues would be dropped from the state government's four-year forward budget estimates.

"It's critically important to make sure that both the industry and in particular the investment community have some sort of certainty as to what the cost structure of companies will be," AMEC chief executive Simon Bennison told RESOURCESTOCKS from his office in Perth, emphasising that the three-year debate over the tax regime that ended this year left a negative mark on investor sentiment.

"They can't keep doing reviews, they've just got to settle back and accept the royalty structure as it is. We're still not great believers in the 10% mine head value that the government has adopted as the benchmark. However, we're working within that, as is the government, and we're trying to make sure that Australia remains competitive in this royalty space.

"I think WA is pretty much in the money as to where the royalties should strike. There's still room to move downwards with some of the commodities such as uranium, but that will come in time."

Bennison otherwise stressed a convergence of worrying financial pressures, including unsustainable increases in water, energy and motor vehicle licensing costs and the proposed recovery of $2.7 million to meet a shortfall in a WA Mines Department environmental regulation initiative.

"We've now got agencies that are hell bent on going into a cost recovery area, so that the components provided through the public service sector are going to be cost recovered from industry," he said.

"We just think this is a seriously flawed approach to doing business. We see governments in other countries bearing the costs of a number of these services because they see the public good that flows from it and the revenues from discovery that flow back into the community. If you look at the provincial governments in Canada, for example, they give considerable concessional arrangements to the exploration sector at a tax level and right across the board."

There is a palpable concern that junior explorers are being marginalised as the state resources sector transitions broadly from a construction phase to a production phase of investment. The Australian Bureau of Statistics charted a 12%, or $30 million, drop in WA exploration spending during the past fiscal quarter, while industry insiders continued to point anecdotally to a dramatic erosion of Australia's global greenfields exploration market share.

While the efficiencies associated with increased productivity may help WA's evolving mining industry manage its notoriously high labour costs, it's difficult to envision this macro-level return on investment trickling down to small-cap explorers.

Burdeu, however, sees hope for juniors in a combination of a looming cyclic lift in business confidence and government policy.

"With a move to a more operational workforce, there is that broader uplift across all parts of the industry, not just major producers, but also the exploration industry as well," she said.

"This tax year will be the first year that investors will start to take advantage of the exploration development incentive, and that has a direct return to shareholders who invest in junior mining companies without taxable income. At the state level, we have WA's exploration incentive scheme, and while that isn't a direct return to investors, it is a cash injection to junior explorers to really help them discovery the mines of tomorrow."

Traction in WA resources industry sentiment has been most recently demonstrated by the Deloitte WA index, which increased by 12% in May with the market capitalisation of the state's listed companies reaching $147 million.

This performance coincided with some much needed buoyancy in the iron ore price as well as the listing of BHP Billiton's coal and base metal spin-off South32, which followed a lukewarm debut with some encouraging analyst coverage that seemed to legitimise the company.

"The recent listing of South32 has reinforced WA's continued position as a global leader in the resources sector, and is certainly one of the most significant changes in the WA index in recent years, and a vote of confidence in WA as a whole," Deloitte clients and markets partner for WA Tim Richards said.

"In addition, iron ore's continued recovery, closing the month at $US59 per tonne, provided stability which has generally been lacking over the last year."

For anyone taking an outsider's perspective, however, there remains little inspiration for framing the recent contortions of the iron ore sector and its heavyweight leaders in a positive light.

Debates, controversies, one-upmanship and moral grandstanding are nothing new to Big Iron in WA. But when such a tit-for-tat coincides with a 50% fall in the iron ore price and snowballing news of expanded China-Brazil supply agreements, the kerfuffle takes on more than the usual gravity.

Ever-growing exports from Rio Tinto and BHP have incited impassioned rhetoric among the rivalling multinationals, their pressured competitors, typically neutral industry watchdogs and politicians at both the state and federal level. Whether or not the headlines in this storm will result in meaningful erosion of international investor confidence remains to be seen. In fact, it may be impossible to quantify the practical influence of these kinds of intangibles.

"When you get something that is such a high percentage of your revenue base both at a state and federal level, and there has been such a level of volatility that we've seen in recent times, people always get very sensitive to the change in revenue streams, the change in the cost structure and the change in competitiveness within the industry," Bennison said.

"When you've got the dynamics that we have within the iron ore sector in particular, where you have a couple of large companies on one end and a group of smaller companies at the other, all being vital to the productivity of the state, it does put us into quite a different set of dynamics that we haven't had before."

The rollercoaster of iron ore prices and the rise of the mid-tier miners in WA over recent years has been a direct reflection of Chinese economic growth rates. And although the cacophony of a wounded WA iron sector - including the recent dismissal of a federal inquiry into the industry - may be sending mixed signals to the state's best customer, it's also inspiring a reinvigorated international dialogue.

Marmion and Mines Department director general Richard Sellers extended a tour of Singapore, South Korea and China over May and April in an effort to highlight recent policy victories in a tight Asia-Pacific investment scene.

Premier Colin Barnett, meanwhile, has amplified his optimistic tone about future Asian investment in WA, noting the consistent involvement of Chinese steelmaking giant Baosteel shortly after the nixing of the proposed iron inquiry.

"While some of the heat has certainly come out of the iron ore market, China still is a massive producer of steel and it will grow, though at a slower rate. And then you're getting other markets coming in - India, which is trebling its steel production between now and the end of the decade," Barnett said.

"Because the iron ore price is low by recent standards does not mean the major organisations like Baosteel will resist the temptation to invest. They are looking 20, 30, 40, 50 years into the future."

Unfortunately, the promise inherent in WA's $A114 billion resources industry remains cold comfort for many of the state's smaller miners and explorers. The state resources sector workforce is expected to decline from 105,200 in 2014 to 87,000 by 2025.

Although these employment figures would still be about double the pre-expansion levels of 2004, the shift could indicate a continuation of trends toward higher earnings but less exploration activity. In this unfolding scenario, a high-cost jurisdiction like WA will require particularly compelling policy offsets and a steadier focus on generational survival.

Both mines suffer poor quarter at the same time 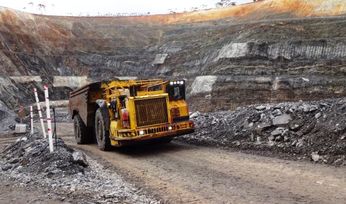 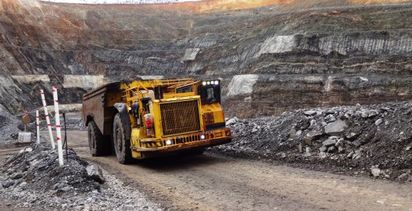