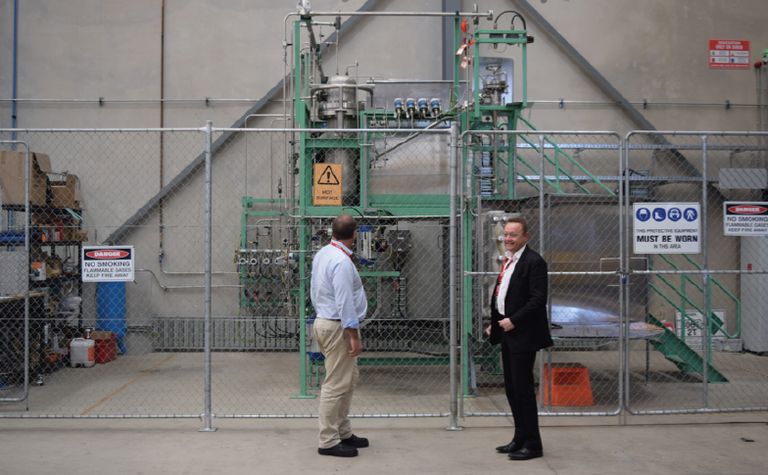 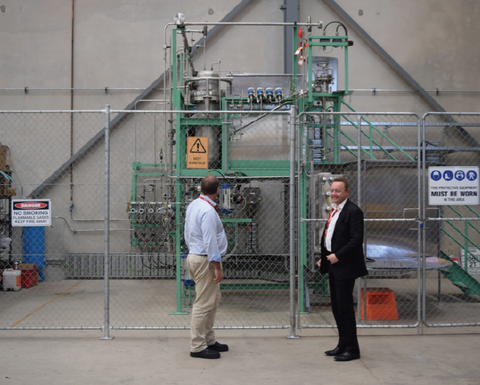 Hazer's Geoff Pocock and Tim Goldsmith at the University of Sydney pilot plant.

Under a heads of agreement announced this morning, MinRes will gain access to Hazer’s graphite production technology, and will build an initial 1000tpa plant, with plans to scale-up tenfold if the initial development is successful.

Similar to MinRes’ interest in lithium at the recently ramped up the Mount Marion spodumene and Wodgina lithium project, the ultra-high purity graphite will be suitable for high-end applications including batteries and electrodes.

MinRes, which was an early backer of Hazer, pumped in an additional A$5 million earlier this year to take its ownership in the company to 14%.

At the time the pair announced their intention to consider development of a commercial scale plant to supplement MinRes’ existing battery materials business, but it wasn’t until last month that Hazer claimed success with the production of 99.95% ultra-high purity synthetic graphite, demonstrating the potential for the graphite to become an alternative for use in lithium-ion batteries.

MinRes will fund the entire development, with Hazer to provide technical assistance and obtaining royalties from revenue generated by the sale of graphite.

Hazer managing director Geoff Pocock said the deal could accelerate the commercial deployment of the Hazer technology, and herald its transition from a research and development company into a revenue-generating industrial technology business.

A pilot plant started up earlier this year to scale up the eponymously-named Hazer Process, which takes commonly available, relatively cheap iron ore and gas and transforms them into hydrogen and high-purity graphite using a simple heat-based chemical process.

Hazer Group was established in 2010 to commercialise the process that was developed by researchers at the University of Western Australia and listed on the Australian Securities Exchange in 2015.

No location for the plant was revealed. 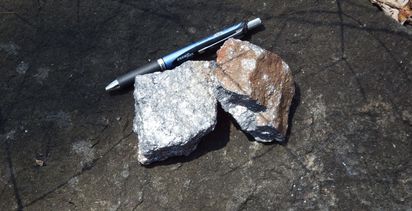