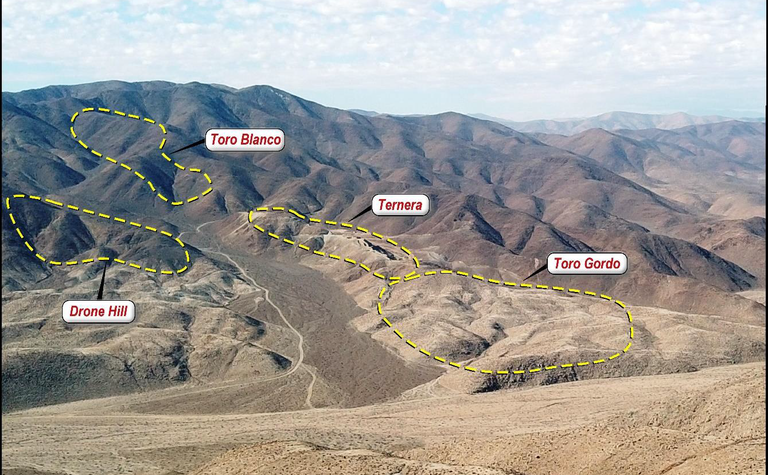 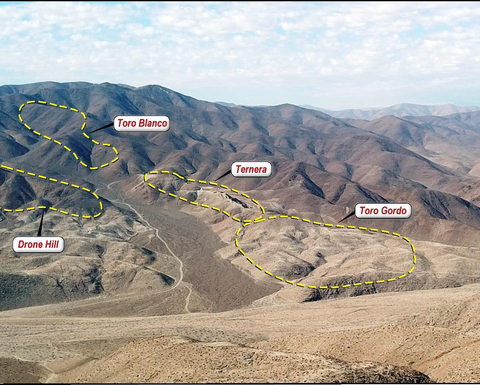 Ternera is surrounded by targets

"The more work we do, the more it is growing," Reeves said.
The company has two rigs operating around the clock, and while it has so far drilled more than 20,000m to test the Ternera deposit, it is continuing to expand the program because each hole continues to expand the scale of the system.
"We're looking to continue drilling into at least the first quarter of next year, but we may keep pushing it out as long as we're drilling with a 100% success rate," Reeves said.
"In my career I have never worked on a project that achieved that … it's quite a special system."
The company backdoor listed on to the Australian Securities Exchange earlier this year, and by Reeves' assessment, around 90% of its cash has gone into funding almost 50 diamond holes, with nine of the holes returning plus 100 gram per metre intersections.
So far, Ternera has tripled in size. The intrusion-related gold system correlates well with the IP anomaly, and it remains open in all directions, although a coherent, high-grade zone is emerging in the south-west.
One recent step-out hole, 51, drilled there returned visible gold over 61m, and its assay results are keenly awaited.
"That has opened our eyes to the scale," Reeves said.
"It's a big mineralised system, with a vast quantity of gold kicking around in it, and while one hole doesn't make a deposit, it changes the scale of Ternera.
"We are starting to see a gold deposit that is mineralised from surface to about 475m deep, with a strike of at least 750m and a width of 600m."
The IP coverage will be expanded to the south as a result.
The company, which is earning 80% by delivering a feasibility study by January 2022, is keen to increase its ownership to 100% and accelerate El Zorro towards mining.
Early metallurgical testing has also been positive, with high recoveries from free-milling gold.
Reeves said the Tesoro team had the experience to develop a mine in Chile, and as Ternera was well located with respect to infrastructure, was confident of accelerating a development.
The company is looking toward a maiden resource estimate in the first half of 2021, and has remaining funding of $5 million.
It is also looking at other targets in the immediate around Ternera, such as Drone Hill, Toro Blanco, Ternera North and Toro Gordo, where channel sampling has been positive, and where drilling may prove they are extensions to Ternera.
Tesoro has increased its holdings in the region to 540sq.km and there's a lot of district scale work to be done over the 5km El Zorro strike, including at the outcrop at Buzzard about 1km to the south.
"There's a lot to like at Buzzard, but our focus right now is on Ternera, and looking out to Toro Gordo and Done Hill, which will take priority," Reeves said.
Tesoro shares have risen from 1.1c at the start of the year to peak at 45c last month.
The stock was steady at 33.5c this morning, valuing the explorer at $160 million. 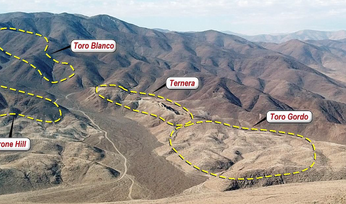 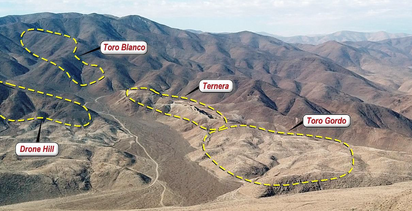