J-S on the challenges ahead for mining

RIO Tinto CEO Jean-Sebastien Jacques gave a frank assessment of the challenges and opportunities ahead for the mining sector at the Melbourne Mining Club’s annual London gala. J-S Jacques at the Melbourne Mining Club in London

Jacques said for the mining sector, there were two key growth drivers: GDP and trade.

"Over the past three decades, there is no doubt that trade was the key driver of growth," he said.

"90% of our product moves from one country to another - that's a reality."

Still, Jacques said he was optimistic there wouldn't be a trade war between China and the US.

"I spend quite a lot of time worrying about politics," he admitted.

That's why so far this year, Jacques has made six trips to Australia, four to China and 4-5 to North America to maintain strong relationships with governments and customers.

"What is absolutely clear is that in the past 6-12 months, we've seen a rise in resource nationalism," he said.

Jacques said that was a result of miners making a "lot of money" again and countries wanted a larger slice of the cake.

"If you're not making money today, you've got a serious problem, if I'm honest," he added.

Jacques said Rio was "long Mongolia" despite the problems the company has had there with the government.

He denied Rio had been too aggressive in the original investment agreement with the government, saying that a World Bank study had found that Mongolia would get 75% of the benefits of Oyu Tolgoi without investing a cent.

"I think that's a pretty good deal," he said.

Jacques said the key to educating governments and the general public wasn't through television ads or social media, but via word-of-mouth.

He said it was up to Rio's employees to be proud of where they work and spread the word to "Joe Bloggs on the street".

"Or else, everyone is going to say ‘you're greedy bastards', or whatever word you want to use," Jacques said.

Also on staff, Jacques was asked about reports that he told employees to ‘fit in or f*ck off'.

"That is absolutely correct.

"It was in Australia, so remember the ‘F' word can be used as punctuation over there," he said to laughter.

Jacques said he made the comment in response to a question about ‘dead wood' in regards to safety.

"If you asked me the same question again, I would say exactly the same answer," he said.

Jacques said across all the countries Rio operated in, the company was starting to experience major cost inflation.

"When you tender new pieces of work, people are coming back with double-digit [inflation] numbers," he said.

"There's no doubt that we will experience increases in terms of contractors and employee costs."

Rio's workforce has halved over the past decade and technology will lead to further reductions in the next 10 years.

"I can't give you a number, but I'm conscious there will be an impact," he said.

"If you look at the Pilbara, 16 mines, even if you have two brains, three brains, it's very difficult for any human to optimise it further without the introduction of artificial intelligence."

Jacques said the board of Rio was making decisions for the long-term, but many investors were only interested in the short-term.

He said the mining sector still had to restore credibility to attract investment.

"Exploration is a long game - we have to be patient. It's clear that all the easy ones have been found," he said.

Jacques said Rio believed in the electric vehicle revolution and it was well-placed in aluminium and copper.

"The question we face at this time is should we enter into other commodities in battery technology?

"We're looking at lithium, nickel and a few others but I shouldn't say much more than that."

Disclosure: the reporter is a volunteer member of the steering committee of the Melbourne Mining Club.

J-S had a back to the future moment last week, writes Barry FitzGerald 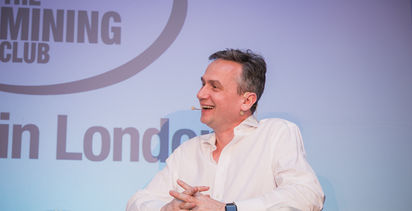