More than 300km of underground tunnels are developed each year in Australia’s longwall coal mines. The rate at which development roadways are advanced — so vital to the overall performance of the mine — is still not adequate at most mines. A new R&D project is closing in on the answers.

Significant steps are being taken in the coal industry’s quest to remove roadway development as an obstacle to longwall system optimisation.

In July 1997 CSIRO and JCOAL signed an umbrella agreement for investment in productivity-related research projects for the Australian underground coal industry. Under the agreement, JCOAL agreed to jointly fund critical areas of research and development that would result in a direct improvement to Australian productivity. Funding from Australia and Japan would be about equal. The subject of the first study or “pilot project” was improvement of underground roadway development rates. Following a scoping study completed in March 1998, a formal agreement for the Rapid Roadway Development (RRD) project has now been finalised.

Two years ago I was critical of efforts to automate the bolting cycle. I described the steps between manual operation and automation as 1. Manual; 2. Mechanical; 3. Remote; 4. Autonomous. The problem with past efforts to automate the bolting process? They were trying to automate a manual process. Even with the ability to install 1-6 bolts autonomously, the advance from a systems point of view is not improved because bolt feed quickly becomes the critical path.

Early in the project we reviewed the process and found that the feed system was just as critical as the bolt installation and both processes had to be autonomous to be beneficial.

The project aim is therefore to design, build, provide systems support for, and test run, an integrated, autonomous conveying/bolting module (ACBM) which can be positioned between various production machines and coal haulage options. The idea is basically to be able to do place changing without the need to flit between cut-outs. The ACBM would sit behind various cutting machines — including a tunnel boring machine — and install bolts as quickly as the miner could cut. The targeted instantaneous advance rate is 15m per hour.

Critical to achieving this is the type of consumable used. Probably the best analogy is to the nail gun: the new consumable must allow a one-step bolting process rather than a three-step process if a serious attempt is to be made to automate both the feed and bolting stages.

The answer at this stage is the BHP self-drilling bolt. The focus of several years of development, the bolt has been subjected to underground trials where installation times of less than 60 seconds per bolt have been demonstrated. The 50-tonne-capacity bolt has a consumable drill tip and chemical is pumped through its centre and down the outside to positively encapsulate the full bolt length. In the automation process this means that drill rods and chemical sausages do not need to be considered. A reduced installation time will allow two rather than four bolters to install a 4-6-bolt pattern.

A 3D visualisation model, into which the machine has been placed, is assisting efforts to fine tune the engineering design layout and machine functionality. At the front of the machine is a 2t-capacity hopper that allows a 3m overlap between the bolter and miner. The feed system consists of identical units on both sides of the machine, each featuring three bulk consumable containers containing 200 2m-long roof bolts, 100 1.2-1.5m rib bolts and 300 litres of roof bolt chemical. The bolts are transferred by a new mechanical underfeed system that does not use robotics or an overhead gantry for bolt transfer. Roof bolts are rotated by 90 degrees before being transferred into a small carousel attached to the roof bolter. Rib bolts are transferred in a similar way, but directly into the rib bolter. 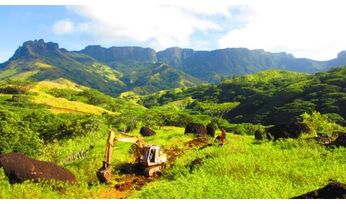 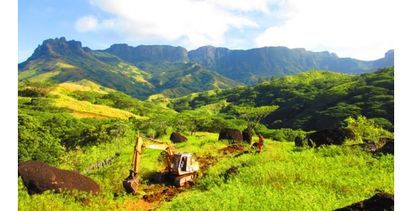 'Aussies the best', says gold major, and they prove it again